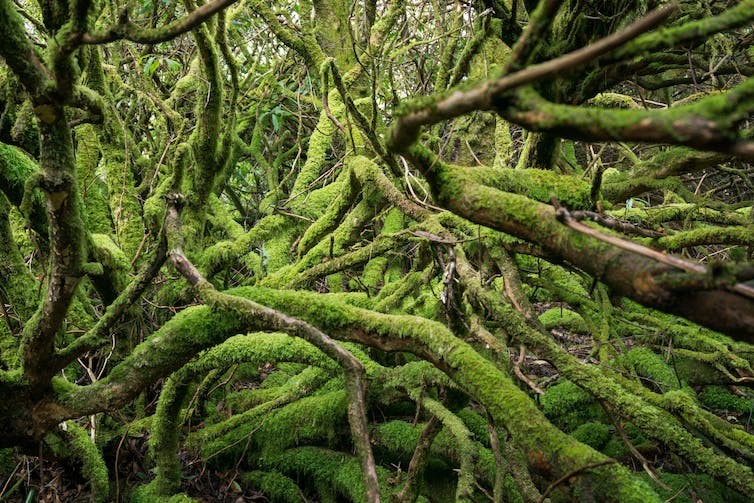 When William the Conqueror surveyed his new kingdom in 1086, from lowland to upland, Britain was covered with trees. In low-lying Yorkshire, the East Anglian Fens and the Somerset Levels, wet woods of tall white willows and alders lined great rivers. On windswept highlands in the Pennines, north Yorkshire and Cumbria, goat willows shed fuzzy catkins in downy blankets and dead leaves of wintertime moor-grass formed dense carpets.

Along the western coast of Britain were extensive Atlantic rainforests: ancient, twisting trees enmeshed with boulders, all richly clothed in mosses, lichens and ferns. Now largely forgotten, these enigmatic forests once clad the lower slopes of hills and clifftops.

Where Britain’s rainforests remain, they provide rich sanctuaries for woodland wildlife absent from the wider landscape, including old man’s beard, a lichen which hangs from branches in tangles.

Along with thickly wooded pastures where peasants grazed pigs among wild deer and boar, Britain’s rainforests persisted unenclosed into medieval times. Today’s ancient woods were enclosed from these same landscapes around 1,000 years ago.

On moors and heaths, trees were progressively removed by centuries of burning, grazing, and draining to support an abundance of sheep and grouse. Farming, timber extraction and livestock grazing erased most of the country’s natural wealth, with much of this loss happening surprisingly recently. Half of England’s ancient woods remaining in the 1940s were destroyed during the second half of the 20th century.
.

Yet survivors from these earlier landscapes are found across the countryside in shrunken patches of oak-bluebell woodland which cling tenaciously to cliffs and outcrops or meadows with rare flowers and unique fungi. Often overlooked, these relics persist anywhere axes, ploughs or sheep have failed to reach. Wizened rowan trees and gnarled hawthorns, shrunken and bent by chill winds, may designate thousand year-old landscapes. Finding these patches could unlock future woodlands rich in currently rare species.

What to look out for

Plants like bluebell, yellow archangel, dog’s mercury and wood sorrel may survive underneath stands of bracken (a tall fern) and yellow-flowered gorse (a prickly shrub described as woodland in waiting) for centuries after a woodland has been cleared. These plants mark the spot where a woodland once grew, and where it can easily be encouraged to grow back.

Maps and road signs offer hints too. Gardom’s Coppice in the Peak District is shrouded by recently-grown birch, but it holds a thousand veteran trees which were cultivated for wood over centuries and may be up to 800 years old.

Former woodlands also leave distinctive bands in the soil: patterns which reflect the movement of water through earth undisturbed by ploughing over long periods. I am studying how fungi and bacteria living in such soils might tell us even more about the woodland that once grew there.

How to bring them back

Having discovered suitable sites, the first thing to do is remove sheep and cattle which gobble up seedlings. This will allow trees to produce saplings, unlocking nature’s own powers of recovery. Soon, willow and birch seeds will arrive on the wind, berry-bearing holly, hawthorn and rowan will emerge from bird droppings and oaks may be planted by jays caching acorns.

Natural regeneration can freely rewild vast areas. The resulting habitats, which spring back quickly once grazing is restricted, are richer in plants, animals and fungi than plantations and cost nothing to create or manage. Sometimes the answer is to reduce grazing for a short time and bring herbivores back once trees are established. Either way, the complexity of the ecosystem recovers over time.


Shadow woods indicate the extent of a former woodland and where reforestation is most likely to succeed, with high levels of resulting biodiversity. That’s because components of the former woodland are ready and waiting to aid the regeneration. That includes soil fungi which form partnerships with young trees and waiting flowers like bluebell and stitchwort which spread out under developing canopies to become the understorey. This reminds us that, ecologically, a woodland is much more than just the trees, but the whole functioning system.

Don’t have time to read about climate change as much as you’d like?

Get a weekly roundup in your inbox instead. Every Wednesday, The Conversation’s environment editor writes Imagine, a short email that goes a little deeper into just one climate issue. Join the 10,000+ readers who’ve subscribed so far.