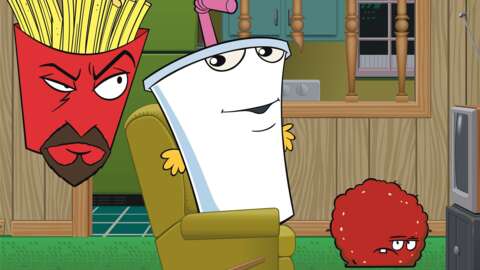 Aqua Teen Hunger Force, also known as Aqua Unit Patrol Squad 1 and Aqua Something You Know Whatever, aired on Adult Swim from the very beginning of the TV block’s inception in 2001, and dropped the last of its 138 episodes in 2015. Now, 8 years later, the anthropomorphic food misanthropes are back for a 12th season, Entertainment Weekly reports.

Adult Swim announced today that it has ordered five new episodes of the series. Creators Dave Willis and Matt Maiellaro are back to oversee the show, with Dana Snyder (Master Shake), Cary Means (Frylock) and Willis (Meatwad, Carl, Ignignokt) are all returning to voice their respective characters.

“We are thrilled to be making more Aqua Teen Hunger Force episodes for a new generation of fans, building upon the most impressive collection of IP ever assembled,” the creators said in a statement. “Success is optimal and leads to quality.”

Aqua Teen Hunger Force follows the misadventures of Master Shake, Frylock, Meatwad, and their sweatpants-wearing next-door neighbor Carl Brutananadilewski as they encounters beings like the Wisdom Cube, the Mooninites, and the Cybernetic Ghost of Christmas Past from the Future.

Adult Swim released a series of Aqua Teen shorts, titled Aquadonk Side Pieces, last year, as well as a new movie, Aqua Teen Forever: Plantasm, last year. The movie will be available on HBO Max starting February 8. There’s no word yet on when the show will return.

The products discussed here were independently chosen by our editors.
GameSpot may get a share of the revenue if you buy anything featured on our site.